I hit the road early from my campsite at Hilgard Junction State Park, OR, and was around Richland, WA, when I spoke with Aaron.

"Yeah. I should be there a little after lunch," I said

"Cool. I won't be available until about 8:30 tonight, but I'll leave the place open for you," he said.

A little Google searching led me to a Seattle Times article entitled, "Washington's top ten mountain-bike rides." I cross-referenced the rides against the map--I don't know Washington for shit--and found that two of them were more or less along my route. One was substantially off the highway, but the other, a place called Duthie Hill Park, was just a few miles from the Interstate. The article called it, "The most-visited mountain-bike trail system in the state." (The author apparently had a real thing for hyphens.) I read a few reviews and it sounded like a lot of fun.

Issaquah, WA, is not far on the western side of Snoqualmie Pass, which puts it well into the rain-forest climate for which Seattle is so well known. The trees there are huge and ferns abound on the forest floor. The canopy is so dense, I had to return to the car to replace my sunglasses' dark lenses with the clear ones. It felt like I was riding in some enchanted forest, or maybe on Endor.

And the riding was incredible. Many of the freeride trails were far beyond my ability, but there were also some nice, progressive stunts so I could practice my rather impoverished technical skills.

And still being acclimatized to high altitude, I was blowing by the locals on all the cross country trails. I felt like a superhero.

It was among the most fun days I've ever had on a mountain bike.

Want to get a feel for it? Here's a video of a trail called Boot Camp, a non-technical little flowy descent that I must have ridden at least six times that day. Notice how quiet the bike is in the video. That should give you some idea of how smooth and flowy those banked turns are.

Now that is a hell of a good way to spend an afternoon.

On ID-33 heading eastward out of Sugar City, I caught my first glimpse of the Tetons. They peaked up and around the Snake River Mountains in front of them, appearing through the brownish haze (which I learned later was smoke from Alaskan wildfires) like an idea not fully in focus. I had been about one-fourth debating with myself if I should have just stayed in the Ketchum area one more night and then driven all the way home rather than take this trip to Targhee, but when I saw the Tetons it was like that moment in an argument when your interlocutor says something irrefutable. I said aloud, "Oh. The Tetons." Like: right. Rising jagged, majestic, unmistakable--though not really as breastlike as the French-Canadian traders who named them apparently wished. (Fellas--there are three of them. You must have been really lonely.)

Debate over. I was doing exactly the right thing. 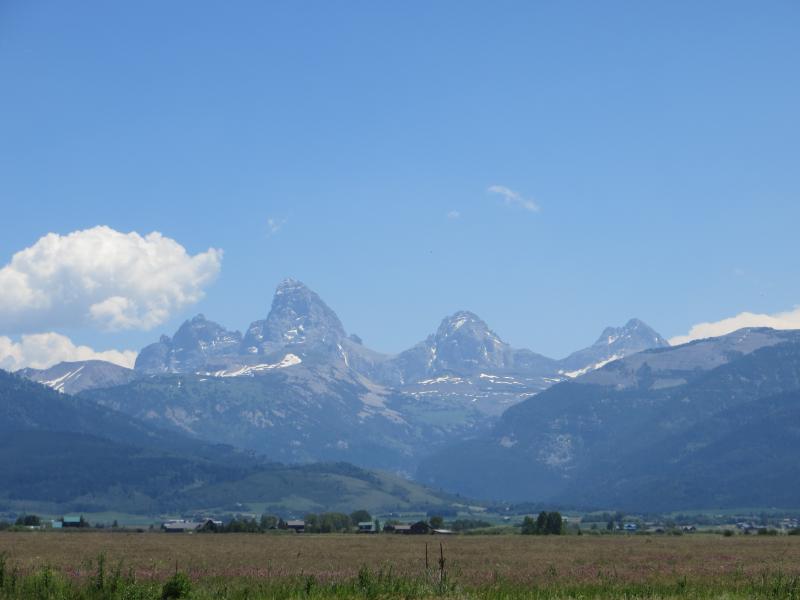 The first time I went to Delicate Arch, back in April of 2008, I stayed well past nightfall. It hadn't been my plan, it's just that it was beautiful and powerful and that as darkness fell more and more people left--as the sun sets into golden hour you'll be among about a zillion camera-wielding tourists--until I thought maybe I was alone. I lay down beneath the arch and let it block out part of the sky. At some point I did hear a person shift somewhere behind me. In the dry desert air sound carries a long distance and the night is mostly quiet and there is no mistaking human sounds. But nearly alone in a magical place is still magical. I stayed to watch the moon rise.

This time around I planned on staying late. I brought a full Camelbak, a little food, layers in case it got cold. It was the first night of my trip and I sought something like a benediction. I had been scrambling over the past few days to get everything ready, but all that was done now, and I could just sit. I wanted to meet the energy of the moment.

June is a lot warmer than April, and I was never even close to alone. A big guided group of photographers came up after nightfall to try to get shots of the Milky Way behind the arch. I could clearly hear them discussing technical aspects of nighttime shooting, despite being a good 100 yards away.

The moon was two days shy of last quarter and so wasn't going to rise until very late. The photographers' guide said that big thunderstorms the night before had washed all the dust out of the air--it was a stunningly clear night. The Milky Way was glorious and bright, and there were a billion stars, and I sat on a rock in the bowl below the arch and watched the heavens and thought about what the light feels as it travels between the stars.

Venus and Jupiter danced together in the west and I sat there in the dark desert night and and let myself feel what I was carrying with me and opened myself to what lay ahead. 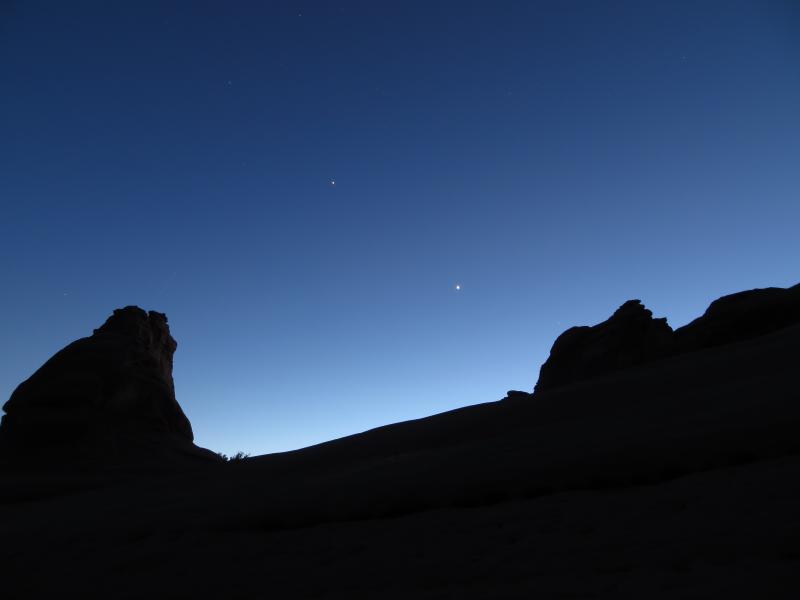 I was at Sun Valley talking to the woman, 60ish or so, working the lift ticket counter. I was asking about the mountain's winter offerings. "I hear you have a ton of snowmaking," I said.

"Oh yes," she said, clearly delighted, almost bragging. "We have more acres of snowmaking than anywhere else in the country."

"So when do you get your big natural storms?" I asked.

Her smile flickered a little and she hesitated.

"It's changing?" I offered.

"It's just like that in Colorado, too," I told her.

Earlier that morning I'd been talking to a mechanic at a local bike shop. He too had mentioned Sun Valley's extensive snowmaking. When I asked him a similar question about their storms, his response was rather more bleak. He said, "Every year we see the desert move a little further north."

I was driving eastward on US-20 through Idaho, when I saw ahead of me a heavyset man in a bright orange shirt pedaling up a hill on a tandem bicycle, alone.