When I was making breakfast this morning, it occurred to me that the Barcelona Open was, right at that very moment, happening. I turned on the TV briefly to tennis coverage. Sure enough, they were broadcasting from center court in Barcelona. "I've been there," I said aloud, and a little pink hue of pleasure warmed me from within. Exactly one year ago was my first full day in Barcelona.

That pink hue of pleasure: Understand, I did a thing that scared me enough that I thought it impossible, but it wasn't even close to impossible, and now I carry both the memories of the trip and the memories of doing the trip--which is different--within me. "I've been there," I say, and it's like a little dawning inside my heart.

My life is so far removed from where I was a year ago, it seems almost surreal.

Happy Saint Jordi's Day. Go buy a book or a rose for someone you love. 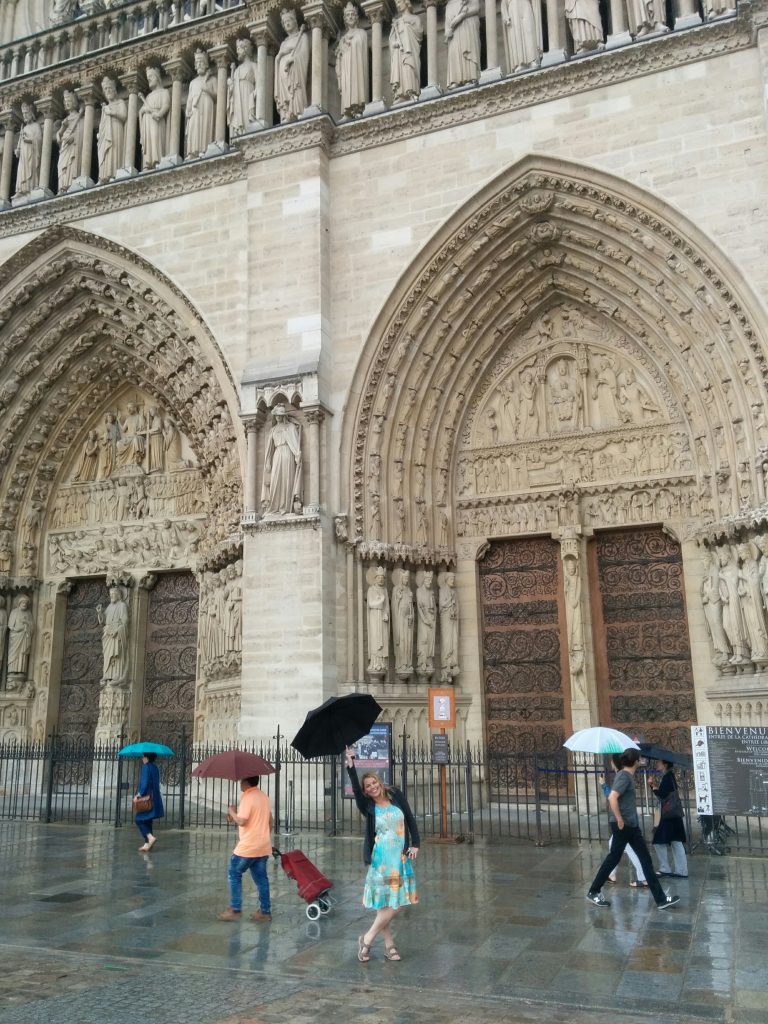 June 1, 2018. On this exact spot, Eurydice asked, "Where is Notre Dame from here?" Behind her: the facade to Notre Dame.

Paris is the most visited city in the world. Memories of Notre Dame are about as common as clouds in the sky. So why does this feel so goddamn personal? Is it ridiculous that I'm nursing a broken heart tonight?

This summer, behind the scenes here at Free Refills, there's been a lot of contemplation and a fair amount of zero-drafting about where we're headed.

A certain something popped up in a zero-draft a few weeks back and it's been whispering to me ever since. I've given it a bit of polish so now it can whisper to you:

It doesn't really matter if it's fiction or non-fiction. The question you are asking is, Is what I say true?

You feel the truth, so what you are seeking is that feeling. In the truth's glow you cannot lie; in it there is only truth.

(Though sometimes the truth can be a bit...complicated.)

Graduation was behind us, and the next milestone approached: I was a few days away from leaving for college. James and Robin, both headed school in California, still had about a month of summer left, but we all together needed one last hoorah.

We decided to go camping. We met one night at Swenson's and, over ice cream, made a list of what to bring and who would bring it. James said he'd bring spices. I wrote it down on my little pad in big letters: SPICES.

We took food and water for a couple of days, sleeping bags, a CD player to plug into the tape deck. James did not bring spices, that lazy bastard. We packed everything into my parents' VW camper and drove up to Jemez Falls, stopping in Bernalillo at the KFC on the way to pick up our first night's dinner. It thunderstormed like hell that night. We listened to the first Smashing Pumpkins album, Pearl Jam's Ten, some Pink Floyd. We talked late into the night.

Because we were so excellent at camping, we'd also brought with us a couple of sets of golf clubs. (James played lefty, so one set wouldn't do.) The next day we took little whiffle golf balls and played on the forest floor. "Okay, next hole," one of us would announce. "That stump between the two big Ponderosas. Par four." The fairways were rather bare, but we adjudged it an enjoyable course.

(These are the things you may not always remember, but you will never, ever forget.)

I'd been in Madrid for all of five minutes when I glanced up the sidewalk and saw her. She was some indeterminate Older Than Me, perhaps in her late twenties. Her dark hair was cut in a chin-length bob, and she wore a short white dress with black polka dots. She was tall; it was a long way from the ground to the hem of her dress and her legs demanded a certain attention.

She walked arm in arm with a much older gentleman. Their conversation was amiable and animated. I wondered what their relationship was--their physical closeness struck me as reflecting an intimacy not particularly familial, but I also recognized I was seeing a Spanish scene with American eyes.

They walked past and were gone.

She was the most beautiful woman I'd ever seen.

I said to myself, I think I'm gonna like it here.

I was locking my bike outside the San Francisco public library when from within the building a woman emerged. She drew the eye.

Fashionable boots encased compelling legs. A fashionable skirt hugged well-proportioned hips. A fashionable blouse delineated the upper half of a smart hourglass. Atop it all, a full-face helmet, the visor already down.

A bike messenger stood astride his fixie nearby, and I watched him watch her as she walked over, mounted her scooter, and rode away.

"Oh, she's definitely hot," he said. "She knows how to back up a trailer."