Marie and I decided that for our day's adventure, we'd head up I-80 along the Columbia River toward Hood River. We discussed several hikes we might take, and Marie suggested we go to Punch Bowl Falls. She warned me there'd be a lot of people there, but that its popularity was warranted: the hike is quite lovely, not especially challenging, and has a beautiful destination. Given that part of our plan for the day was to have enough time to find our way to a brewery for a few beers, a modest hike seemed to fit the bill perfectly.

It really was a lovely hike. As Marie promised/warned, we saw many people. It was the first Monday of summer vacation for Portland schools, and it was pretty clear that it was a well-known hike among local high school and college kids, given its modest difficulty, its easy access from Portland, and that it's a fun place spend an afternoon. 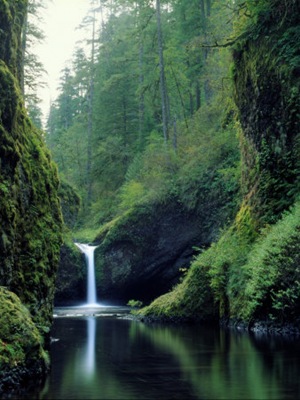 Here's a picture of the back cover of Styx's 1973 album Styx II: 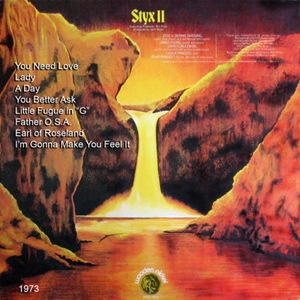 The water of Eagle Creek was very cold as Marie and I waded out carefully among the slick stones. We sat on a boulder and chatted. Around us, people in swimsuits dipped in the cold water.

Nearby, a group of six or seven girls--late high school, maybe early college--stripped out of their hiking clothes into their bikinis beneath. Marie and I watched their tentative movements, their obvious awareness of the implications of those bikinis, the girls self-consciously not quite comfortable with the bodies they found themselves in, still rather new to them at their age. It was kind of sweet, really.

Marie decided to head back to shore. "I'm going to stay here and sit for a bit," I told her. "I'd like to experience the energy here." The little canyon had a lovely energy, not overwhelmed by the presence of all the people nearby. The falls poured down maybe 50 yards upriver, and the creek had undercut the cliff face near where I sat, creating a concave space in the rock that held and contained the energy there. After Marie moved away I got into as comfortable and centered a position as I could and breathed consciously and let the feeling of the place wash over me.

Around me, people did what they were doing. I didn't attach to their conversations or motions, just letting myself be in that place without too much judgment or narrative around it. After a while I felt I was done. I walked out of the stream, we put our shoes on, and we hiked back to the car.

Marie remembered a brewery not much further up I-80, on the bank of the Columbia River. We went there, got a couple of beers, and sat at a table outside, enjoying the sunny day and the river flowing mightily by.

"By the way," Marie said. "I took a picture that was supposed to just be you sitting on the rock in the river."

We call this picture, "Ben Attains a Certain Enlightenment."

(Want to read more about Punch Bowl Falls, including that "it's quite possibly the most photographed waterfall in the entire Pacific Northwest?" Click here.)