This one goes out to Ricardo, obviously.

When I told my friend Ricardo that my proposed itinerary for my trip included San Sebastián, he told me that San Sebastián was one of his favorite places in all of Europe.

He mentioned a selfie he had taken there, and directed me to where he'd taken it from. It's atop a hill on the west side of town, he said, and added,

On top of the hill is a small amusement park, and in the amusement park is the tower I was on top of. When I was in San Sebastián in both 2012 and 2015 there was an old lady who ran the admission stand to the tower and she had a small dog named Miru. I wouldn't be surprised if they're still there. Pay whatever the admission fee is and then march up the stairs to the top and you'll be where I was.

The hill is called Monte Igueldo, and it's prominent from pretty much everywhere in the city, and so I and a friend walked there one afternoon. The theme park is mostly closed right now--it's not yet the high season--but the tower was there, and it was open, so I told the friend that I pretty much had to climb the tower. When we got there, sure enough, the old woman was working the concession. I asked her, "¿Dónde está su perrito?" ("Where is your little dog?") She opened the door to the admission booth to reveal him on his bed. She said he was tired from running around. I told her that my friend had told me about the tower and her and her dog, and that was what had brought me there. She said, "When you come back down the tower, you can hold him and we'll take a picture and you can send it to your friend." I smiled and thanked her and climbed the tower.

The views were every bit as good as Ricardo had promised. I particularly enjoyed the vantage to the west, where I could see a bit of the rugged shoreline and a spot where the ocean waves churned against the rocks, and the foam from that churning turned the water white and turquoise against the deeper blue of the water further out. Even from where I stood, I could feel the energy of that spot. My friend had told me on the walk over about a big change in her life, a break-up after many years of relationship, and she sat on a bench atop the tower and faced that roiling surf for a long time. I let her be. I know what witnessing and internalizing the energy of the world can do for you when your heart is looking for answers.

After a while, we came back down the tower, and I got to meet Miru, and he was a sweet and very cute little guy, and the señora did in fact insist that we take a picture, and then I insisted that she be in the photo with me, and here you go, La Señora del Torre y Su Perrito Miru, and now you too can witness the magic of a world that is both very, very big, and very, very small. 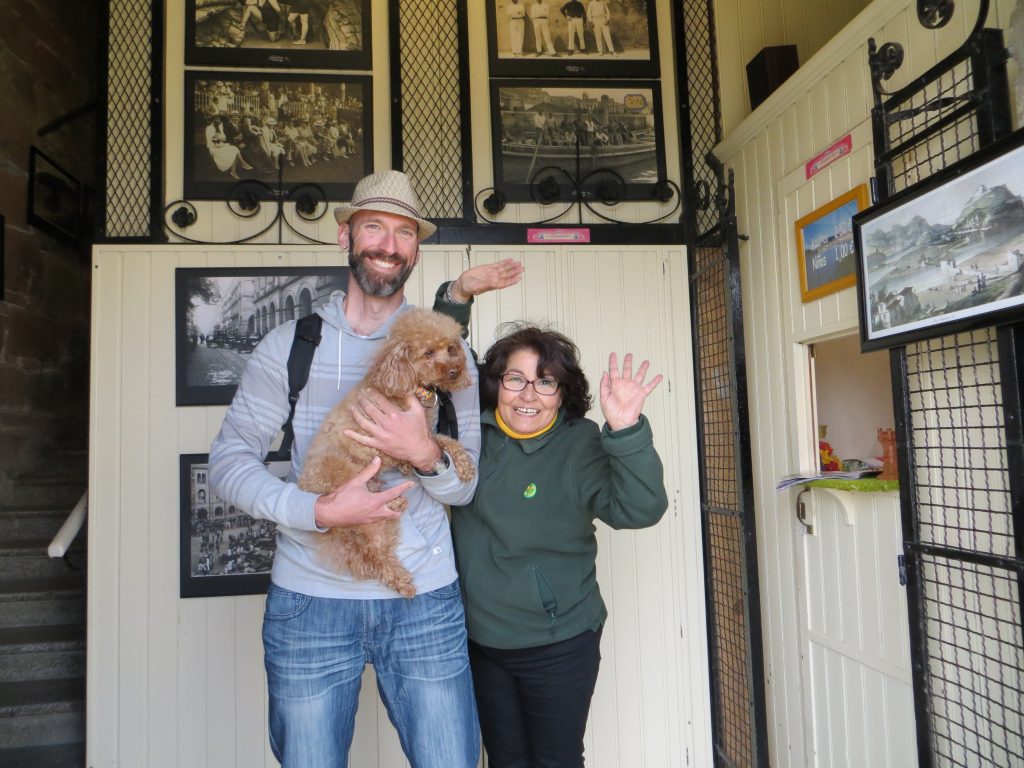 PS. You can find Ricardo's piece about his 2015 visit to San Sebastián here.